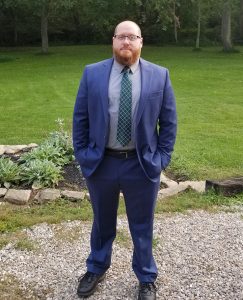 Chris Majors was saved at the age of ten. Though, due to family troubles he wandered from the Lord during his teenage years and joined the U.S. Navy in October 2001 after the September 11th attacks. In October 2005 he stopped running from the Lord after being under the sound preaching of God’s Word once again while visiting Bible Baptist Church in Oak Harbor, WA. He committed his life to God that very night, soon joining the church body and was called to preach the next month. He surrendered to the Lord’s call after seeking counsel and confirmation with the pastors.

In 2005 he began attending the Bible Training Institute of Oak Harbor at Bible Baptist Church becoming a Graduate in Theology in 2011. He went on to receive a MA in Pastoral Concentration in 2021 and earned a Doctorate in Religious Education (D.R.E.) in May 2022 from Great Plains Baptist Divinity School. In May 2007 Chris was honorably discharged from the Navy after serving over five years and was immediately added to the full-time staff of the church to help complete his training for the ministry. After being sent out from the church in June 2010 and serving as an Evangelist church planter in central Washington for over 10 years he was called by God to pastor the Grants Creek Baptist Church and began fulfilling the role of Senior Pastor on September 13th 2020.

Pastor Majors has the desire to minister to the people of God through the Holy Scriptures and prayer (Acts 6:4). To edify and strengthen the saints through the teaching and preaching of God’s Word (Ephesians 4:12). To reach the lost world with the glorious Gospel of Jesus Christ, seeing souls saved, baptized and taught to observe all things the Lord has commanded (Matthew 28:19, 20). To train men for the ministry who can in turn go to all the world and continue the proclamation of hope to the lost (2 Timothy 2:2).